Negative Online Reviews: Not as Bad as You Think (Why?) 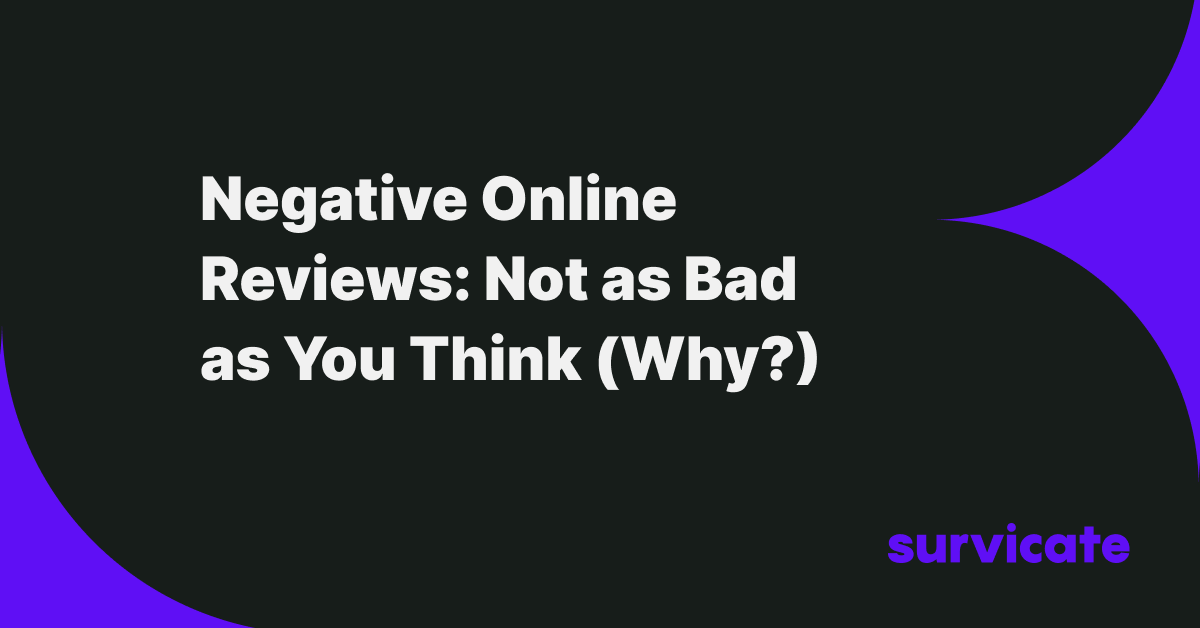 People often take negative reviews more seriously than positive reviews. After all: that one bad review may be the most accurate one and you won't be harmed by not purchasing it.

But there are good reasons to be skeptical of negative online reviews. And it isn't just because angry customers are more likely to vent publicly. There are different aspects of online reviews — both positive and negative — that should make you a bit skeptical.

Negative reviews can be extremely damaging to a business — especially a small one. So it's easy to think that the people who post online reviews are doing it just to harm a targeted business. But this is not generally true.

Kyung Hyan Yoo and Ulrike Gretzel (2008) at Texas A&M University surveyed almost 1,500 TripAdvisor users. They found that two of the primary motivations for writing reviews was to inform other travelers and to help the business reviewed to improve.

This is not something special about travel reviews. We've found that web hosting reviews are normally even-handed, focusing on helping other hosting customers and, to a lesser extent, the hosts themselves.

But that doesn't mean you can always trust negative feedback. Yoo and Gretzel found that there was a strong tendency among some reviewers to vent their anger and punish the company. But it wasn't primary.

There are other reasons to be concerned about negative reviews, however. We'll discuss some of the most important reasons why you can't always trust negative online reviews below.

It's easy to assume that there is just one kind of customer even though everyone in business knows this isn't the case. The situation is even worse for online reviews. According to Duncan Simester, only 1.5% of people ever write online reviews.

And those who do leave online reviews are different from the average consumer. They are more likely to:

YOU MAY ALSO LIKE: Importance & Benefits of Customer Complaints‍

When it comes to customer complaints, the unhappy customer's context matters.

Three researchers at Seoul National University (Daehwan Ahn, Hyanghee Park, and ByungjoonYoo — 2017), found that people rated hotels differently based on the circumstances of their stay.

The researchers concluded that these differences were due to "travelers' preferences regarding features." But it also makes intuitive sense: most business travelers do not enjoy the traveling experience and are less likely to overlook problems during their stays.

What this means for negative reviews is that some are the result of the context of using a product more than the product itself.‍

Related to this is the fact that sometimes negative reviews are the result of the consumer purchasing the wrong item.‍

Many people take their online reviews very seriously — to the point where they think of themselves as experts. Sometimes they are even referred to that one on review sites. And that's great! It's part of what makes the internet fun and useful.

But scientists at Harbin Institute of Technology and Temple University (Zhanga, Zhanga, and Yang — 2016) found that as the reviewing expertise (generally indicated by the number of reviews) rose their reviews became more negative.

This too is intuitive. We see it a lot in movie reviews where critics often have polar opposite views of films than do the paying public. Such reviews have their place but may not be helpful to someone considering whether to purchase a product.

It's interesting to think what implications does it have on the importance of sending customer satisfaction surveys, like the one below, to elicit customer feedback.

By actively giving your customers the opportunity to speak their minds, you prevent them from venting publicly.

The Secret Behind Fake Online Reviews

Everyone has seen online reviews that appear to be fake. Any controversial book that appears on Amazon attracts a lot of people who write terse one or five-star reviews simply because of their opinion about the subject or author.

As a result, Amazon adds "Verified Purchase" to reviews by people who purchased the item being reviewed. That doesn't mean those without this label are invalid, nor does it mean those with it can automatically be trusted. But the label does make the reviews seem more credible.

There is evidence that some bad online reviews come from business competitors. But this does not seem to be what motivates most fake reviews.

But using data from apparel companies, researchers have determined that 5% of online reviews come from people who have not purchased the product they are reviewing. To make matters worse, these fake reviews were twice as likely to be negative.

But there is a big surprise in this data: the people writing fake reviews were generally fans of the company they were reviewing. One of the study's authors said, an average reviewer leaving negative feedback purchased over 100 items from the retailer! And they continued to buy from the retailer after the negative reviews.

In terms of what motivated these fake reviewers, he speculated that their attachment to the company made them want to have a say.

YOU MAY ALSO LIKE: How to Respond to Negative Feedback "Real Cases"

Small businesses can be badly damaged by negative online reviews but they have the advantage of being better able to respond to them. In fact, with proper feedback management, it's possible to turn a bad customer experience into a good one via a positive interaction about a review.

The ways to approach this are laid out by Rieva Lesonsky at Fundera. As we've discussed above, many negative reviews come from people genuinely trying to help the company. So it's a good idea to assume that is the case.

The most important thing is not to react inappropriately. Don't get defensive. Don't dismiss negative reviewers as loons — even though they occasionally are. And don't try to pit your supporters against them. Remember: a negative review may come from one of your biggest fans.

As far as what to do, take responsibility. If your company has done something wrong, admit it, and apologize. According to Lesonsky, a third of negative reviews on Yelp are changed to positive when the business responds to their review.

When a negative review is about something that isn't your fault, you can at least acknowledge the reviewer's experience. Often, people simply want to be heard.

And, most importantly - be proactive. Regularly measure net promoter scores (NPS), customer effort scores (CES), or send customer satisfaction (SCAT) surveys to give your customers opportunity to share their thoughts in private. By managing customer feedback the right way, you'll be able to increase their loyalty and prevent those dissatisfied ones from venting in public channels.

Kasia Perzynska
Head of Content & SEO @ Survicate. Hey there! I plan a content strategy for Survicate and guide the content team towards execution. You can see me create some content for Survicate Blog from time to time! :)
Sign up for our newsletter